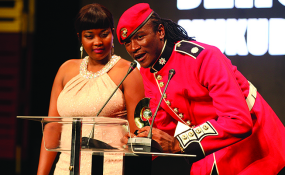 The night was glamorous, the stage was fantastic and the ceremony had its highs and lows. It is not often that National Arts Merit Awards ceremonies go with less blemish than positive comments, but this year the flow of the programme was good.

The ceremony, which was held at 7Arts Theatre in Avondale on Saturday night lived up to its billing. It seems enough groundwork was done to pull an event that can be rated as one of the best ceremonies of the awards.

If it was not for comedian Carl Joshua Ncube who went overboard with his jokes at times, it would have been the best awards ceremony done by National Arts Council of Zimbabwe.

Most people know that Carl has done well working behind the scenes for Nama ceremonies, but someone must have known that it is risky to bring him to the fore on such a national event.

Sometimes he embodies a loose cannon and throws jokes without considering his surroundings. Some of his jokes are insensitive. He has his way of doing things in front of fans that appreciate his vibes, but Nama was not the right platform for his diction.

Well, enough about Carl and his comic lines. Back to the ceremony.

By 7pm, guests were making their way into the auditorium and most made their presence on the red carpet felt in various ways. Some had outrageous outfits, some ladies left nothing to the imagination while a bigger section of nominees made bold statements through their appearances — negatively and positively.

Organisers strict with their starting time and they set the ball rolling when there were still a few people in the auditorium.

Sound and lighting guys were also excellent as they made things flow flawlessly. The sound engineers should be applauded for a good job. Over the past years, Nama has been criticised for failing to handle the technical issues properly. This year it was a different story — the technical team did a good job.

However, the organisers were found wanting in terms of demarcating space for nominees and ordinary guests.

While most artistes on the nominees list were having red carpet interviews, ordinary guests occupied front seats and it consequently led to delays in the programme as some award winners found spaces at the back of the auditorium. They had to walk all the way from the back to the stage to take their awards, which delayed proceedings.

It was another disappointing year for dancehall musician Killer T, who has become a perennial nominee and fails to take anything home. He was nominated for Outstanding Song for “Takangodaro” and the award went to Jah Prayzah whose track “Mudhara Vachauya” scooped the accolade.

Now to the winners of awards.

They both gave credit to their strong fan bases and production teams for their success.

“This is for all the ‘Gafas’ (Winky D fans). You have made this possible. I alone cannot do this, I only sing. My younger brother Layan and my producer Oskid also help me to make music so I want to thank them,” said Winky D upon receiving the People’s Choice Award.

Ammara Brown got emotional upon receiving Outstanding Female Musician award, which she dedicated to her father Andy. She went on stage with her sister Chengeto.

“I stand tall because of my family. I want to thank everyone, my sister Chengeto, my son Khameel who is the light of my life. We learnt a lot from our father and this (award) is for Andy Brown,” she said.

ZBC’s Andrew Neshamba took outstanding journalist in Television award. Although hip-hop musician Takura did not win the Outstanding Male Musician award in which he was nominated that went to Jah Prayzah, his hit song “Zino Irema” got Outstanding Music Video accolade, with its director Andy “Cutta” Sobhuza taking home the gong.

To entertain the crowd, Jah Prayzah and his massive band took to the stage and performed some of his best songs. Different dance groups also showcased their skills on stage and the crowd loved the exciting styles that were shown by the flexible dancers.

Behind the Wall Everywhere by Farai Mungoshi

Whose Land is it anyway by Benjamin S. Sibanda Special Mention