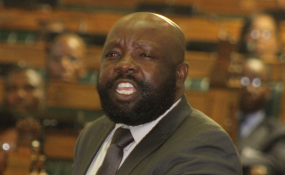 Once in a while, you get people recklessly bringing back history just when we have started forgetting. Former Reserve Bank of Zimbabwe (RBZ) governor Gideon Gono, and Munyaradzi Kereke, his erstwhile assistant and advisor who is doing time for raping a minor, have just done that, forcing us to remember certain bad things.

Kereke came first in late January, six months after his conviction and imprisonment. He offered a profuse apology to Gono for earlier accusing him of a litany of corrupt acts between 2006 and 2009. Kereke had even lodged several applications at the courts in 2013 to have Gono tried for allegedly stealing close to $40 million dollars, diverting government money to fund the Financial Gazette in which he had shares, unprocedurally selling gold to foreigners, and abusing his office to borrow millions from banks, among other claims.

In his apology, Kereke made a dramatic about turn, stating “unreservedly” that Gono was as clean as a surgeon’s garb. He also indicated that he had withdrawn his court challenges after Gono gave “credible and plausible” explanations of his handling of central bank money. The apology received prominent media coverage, curiously.

Interestingly, Kereke skipped apologising to the girl he raped, but that is an issue for another day.

Two weeks after Kereke’s famous apology, Gono responded, also using the same publication, the Sunday Mail, which Kereke had relayed his message through. “Your Governor” said he was accepting Kereke’s apology, but he also mentioned things that got me curious and thinking. He blamed Kereke’s court applications for almost all his tribulations, including a tormented family, a crumbling business empire and isolation from the banking system and former friends. He seemed upbeat, though, that Kereke’s apology was going to extricate him from his current woes.

It appears to me that Gono relished his interview with The Sunday Mail primarily because it gave him the opportunity to appeal to his personal fight with Kereke and the January apology to show that, after all, he is not a bad guy. But, far from it, Kereke’s apology does not prove that Gono has walked the straight path as governor. He still has some explaining to do before he can be seen as a saint.

Cynics are most likely to draw fodder from this. They will be forgiven for suspecting that Kereke’s apology and Gono’s subsequent response are a choreographed circus show playing out on the media stage to sanitise Gono who is so anxious to win back public, political and professional trust. And Kereke would always be a willing pawn in this because he is so desperate to get out of jail.

To start with, Gono strived throughout the interview to sell the impression that Kereke’s accusations were entirely and exclusively responsible for his soiled image. He tried to give the impression that he is a victim, for all his honesty and hard work, of machinations by a colleague turned enemy who did his best to destroy him. The trick here is to appeal to people’s emotions rather than facts and reason. In today’s parlance, they call it alternative facts or post truths. It tends to work in this busy world because people hardly have the time to separate emotion from reason.

It is instructive that controversies relating to Gono’s leadership at the central bank predate Kereke’s claims and court cases in respect of alleged corruption. Kereke only started making allegations against Gono sometime in 2012 following the termination of his employment at the instigation of his former boss. That was close to nine years after Gono started working as governor. Prior to the allegations, Gono made decisions that have generally been interpreted as amounting to corruption, illegality and abuse of office. Because of these negative interpretations in both public and professional circles, “Your Governor” got a bad name. Kereke’s “exposés” only reinforced what the public already knew and felt.

Prior to the formation of the coalition government in early 2009 and the adoption of the multi-currency regime that still subsists, the central bank was involved in numerous activities that, in all fairness, were blatantly corrupt.

What is even more worrying is the opacity and lack of accountability that went with the practice of resorting to the black market. Corruption flourishes where there is no transparency and accountability. It remains possible that “Your Governor” and banking staff took advantage of this. Proper systems were most likely circumvented and because of changing rates on the black market, bank officials could also have taken advantage to divert some of the proceeds to their pockets.

I know of many central bank employees who bought expensive cars, built houses and lived lavish lifestyles during the hyperinflationary era but turned near-paupers afterwards. Innocent coincidences don’t happen that way. It is also telling that the former governor’s business prospered during this period and started crumbling after the adoption of the multi-currency system. That was before Kereke started yelling about Gono’s alleged corruption, wasn’t it?

Lack of transparency and accountability extended to the distribution of the money that RBZ generated on the black market. While Gono insists in the Sunday Mail interview that all transactions were properly documented, this sounds like a tall tale. Until he brings the evidence forth, it is difficult to believe his fable. Could it be true that the central bank was recording how much money went to finance secret service counterintelligence operations, for instance? Given the fact that the shifting dynamics on the black market created accounting loopholes, is it not possible that some of the money was doled out to the generals, cabinet ministers and other individuals without accompanying records?

The point is, Gono and his subordinates at the central bank engaged in activities that enhanced the rational and logical suspicion that systems were abused to benefit a chosen circle. This makes sense, particularly where there are tell-tale signs of abuse, such as the case of bank officials who amassed overnight wealth cited above.

The former governor has in the past argued that he was justified in adopting quasi-fiscal methods at the RBZ because Zimbabwe was facing an unusual threat generated by external powers that he claims were seeking to recolonise Zimbabwe. It is common cause that unusual situations beget unusual methods of doing business, and chances are very low that the RBZ accounting systems were normal. But then, whatever the case, it is never acceptable for the apex bank to even think of being unusual in its methods, approaches and practices. That must be left to the politicians. The central bank governor is supposed to be a technocrat whose work should follow the rules to the dot.

The farm mechanisation programme that the RBZ adopted in 2007 also presents a bleak narrative of Gono’s governorship. Thousands of people, mostly, if not entirely Zanu PF supporters and bigwigs, received tractors, combine harvesters, generators and harrows, among other agricultural equipment, in the name of empowering Zimbabweans to farm productively. The experiment went awry as the beneficiaries failed to repay the equipment loans and government had to assume the debt under the RBZ (Debt Assumption) Act.

The mere fact that Gono failed to put in place effective mechanisms to ensure that the beneficiaries repaid the loans says a lot about governance at the central bank during that time. If the apex bank can fail to install proper systems to ensure debt recovery, which institution will? In any case, most of that equipment was distributed to members of the ruling party. That may be the reason why Gono’s successor, John Mangudya, in 2015 refused to divulge the names of the people who benefitted from the programme, weirdly claiming that it is not in the public interest.

The selective distribution of the equipment is abuse of office, and abuse of office means corruption. Again, this happened before Kereke started yapping.

Before Gono can start entertaining the possibility of people seeing him as clean, he must also clear the air regarding the raiding of private accounts to fund opaque government projects. Technically, he might justify the move as the RBZ can be viewed as having the legal standing to raid private accounts. The devil is mainly in the motive. It’s a definite no-no to swoop on companies, NGOs and individual accounts to pay the elite. That type of Robin Hood is basely immoral. Worse still, if that kind of “philanthropy” is going to close down businesses and stop the operations of humanitarian and civil society organisations.

It is possible that Kereke’s intention in writing the apology to Gono was to clear his former boss for one or two favours in return, somehow, but that “Your Governor” then goes on to try and ride on that to present himself as a saint is as vain as using a mosquito to cure malaria.

Tawanda Majoni is the national coordinator at Information for Development Trust (IDT), a non-profit organisation promoting access to information on public and private sector transparency and accountability issues.