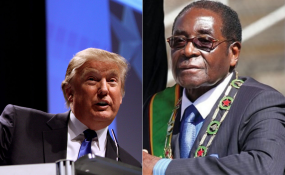 UNITED States President Mr Donald Trump should be given a chance to prove that he is a good leader who can create sound policies that will improve the current world order, President Mugabe has said. The world, he said, should not hasten to judge the new US president, but must wait to see how his policies unfold. Mr Trump has been receiving bad press since thumping establishment candidate, democrat Mrs Hillary Rhodam Clinton in last year’s elections.

And only recently, there was a clear agenda-setting attempt by US media to set President Mugabe and Mr Trump on a collision course after a late-night American live television sketch comedy and variety show, Saturday Night Live, staged a mock-quarrel between the two leaders.

Zimbabwe has been under an illegal US sanctions regime since December 21 2001 when then US president George W. Bush signed into law, the so-called Zimbabwe Democracy and Economic Recovery Act that cut Zimbabwe’s lines of credit from all multi-lateral lending institutions with dealings with the US.

The sanctions, which are estimated to have cost Zimbabwe over $42 billion in lost revenue in addition to contracting the economy by a factor of over 40 percent, were imposed in response to Government’s decision to embark on the fast-track land reform programme..

Successive US administrations have issued Executive Orders every year which served to extend the sanctions regime as they accused Zimbabwe of posing “a continuous and extraordinary threat” to US foreign policy.

To this end, the US State Department’s Office of Foreign Assets Control continues to intercept money accruing to Zimbabwean companies which have lost millions of dollars to US piracy, in addition to punishing investors accused of dealing with Zimbabwe.

“I do not know. Give him time,” said President Mugabe speaking to ZBCTv during a wide-ranging interview ahead of his 93rd birthday.

“Mr Trump may even re-look the sanctions on Zimbabwe.”

The interview will be aired today and tomorrow. President Mugabe said he was surprised by Mr Trump’s election though he had not wanted Mrs Hillary Clinton to win the polls because of her anti-Zimbabwe stance.

“I was surprised by his election, but I did not like Madam Clinton to win either,” he said.

“You see, I knew she could slap sanctions on us as a legacy. Indeed (former US president Barrack) Obama did that just before he left. Why did he have to do it? … Why didn’t he leave it to the incoming incumbent to make his own decision? We are just now under sanctions imposed not by Donald Trump but by Obama. What arrogance is that?”

President Mugabe said he had no problem with Mr Trump’s idea of American nationalism.

Zimbabwe, the President said, was ready to work with the Republican administration. Mr Trump defeated Mrs Clinton to become the 45th president of the United States. Speaking after Mr Trump’s victory last year, Information, Media and Broadcasting Services Minister Dr Chris Mushohwe said it was the Government’s hope that the Trump administration would restore sound relations that existed between Harare and Washington.

Minister Mushohwe said Harare wanted to maintain good relations with Washington and at no point had it tried to pick a fight with the US. The Obama administration worsened relations between Harare and Washington.

This was a continuation of bad relations nurtured by the George Bush administration characterised by illegal sanctions and interference in Zimbabwe’s internal affairs manifest in sponsoring the main opposition and quasi-political, anti-goverment NGOs.

The sanctions have strangled the economy affecting ordinary citizens.