The United Bulawayo Hospitals (UBH) has announced the indefinite cancellation of elective surgical operations as a result of lack of the lack of a sedative drug, pethidine.

A news portal in the country, Zimbabwe.com reports that UBH’s clinical director, Naracacious Dzvanga, had confirmed the hospital’s position through a memo to surgeons and other key staff.

According to the memo issued on Friday, the UBH Chief Executive noted that the shortage of pethidine was a nationwide situation. Pethidine is a pain relieving drug which is used in emergency department and post surgery stages of health care chain.

This is a shortage in the country not just at United Bulawayo Hospitals. As such, all elective cases are suspended with effect from 14 October, 2016 until further notice. 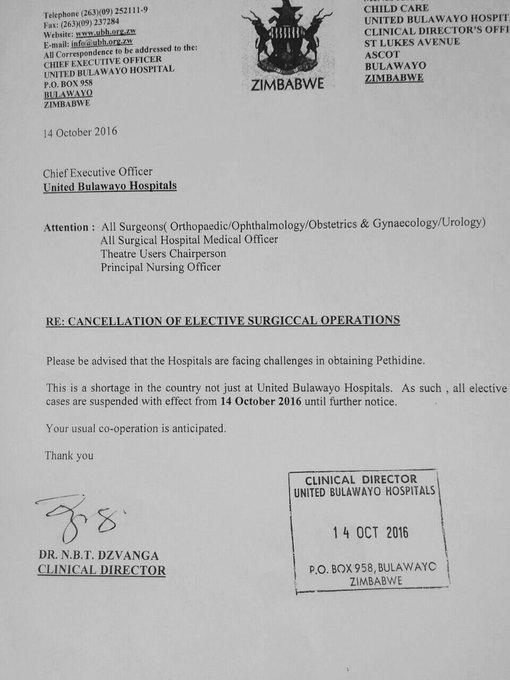 “This is a shortage in the country not just at United Bulawayo Hospitals. As such, all elective cases are suspended with effect from 14 October, 2016 until further notice,” it said.

Zimbabwe has been battling with an economic downturn that has led to acute cash shortage. The country was till recently hit by anti government protests calling for the president to resign. Others also protested against introduction of bond notes whiles the opposition also called for electoral reforms ahead of elections in 2018.

UBH is the second major hospital in the country to suspend crucial surgeries. In September, the Harare Central Hospital also suspended surgeries.

“Due to the critical shortages of Pethidine, Injectable Morphine, Fentanyl, Adrenaline, ETT, Metochlopramide, Sodium Bicarbonate and antibiotics, it was decided after consultation…that we suspend all elective surgeries for the time being,” a memo by Harare hospital administration read.

The hospital also serves as one of the two referral centres for an urban population of about one million. The UBH was opened in 1937 at Khumalo as an extension of the Old Memorial Hospital.

Share
Previous IMF: Zimbabwe lied about Bond Notes. They are worthless paper currency as there is no Afreximbank $200m loan to back the notes
Next Zimbabwe activist Linda Masarira: My Harrowing Experience in Harare Maximum Prison

Zimbabwe: Where to Get Your Covid-19 Jab in Harare

Zimbabwe: Independence Without Land Is Meaningless

By Robert Tapfumaneyi The provision of recalling legislators from Parliament, which has been widely used …