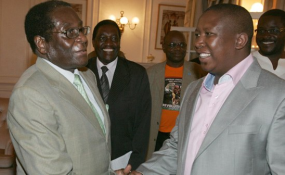 Zimbabwean President Robert Mugabe has, for the first time, responded to Economic Freedom Fighters (EFF) leader Julius Malema’s call last month that he must step down.

According to The Sunday News, Mugabe “brushed off” Malema’s utterances, saying the call to step down must come from his ruling Zanu-PF party.

“Do you listen to anything from Malema? Who is Malema? The call to step down must come from my party; my party at Congress; my party at Central Committee. [In such circumstances] I will step down,” Mugabe was quoted as saying.

The veteran leader said this during an interview with the state television, the Zimbabwe Broadcasting Corporation (ZBC), to mark his 93 rd birthday.

The interview would be broadcast on Monday and Tuesday.

Mugabe has been in power since 1980 when the southern African country attained its independence from colonial Britain.

Malema said at the time that Mugabe was “incapable of discharging his duties” and called on members of the ruling Zanu-PF party to be brave enough to tell the nonagenarian to go.

“Zimbabwe’s situation is bad. President Mugabe cannot even control a spade… We are not going to be good friends if we don’t tell them that what they are doing is not good for Zimbabwe’s people,” Malema was quoted as saying.