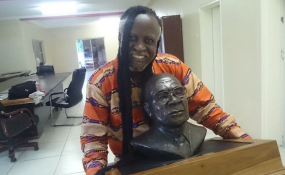 Renowned sculptor and musician Bryn Taurai Mteki, who is popularly known as Sekurutau, has honoured President Mugabe with a bronze three-dimensional sculpture.

The piece, which was done as a bust, shows the President’s face and could be rated among the best works of art done to replicate his features.

The President has been presented with many pieces of honour from various artists and Mteki joins the list with his exceptional work of art.

The 41-year-old sculptor also did another piece resembling a soccer ball that was presented to FIFA president Gianni Infantino when he visited the country recently.

Both sculptures exhibit Sekurutau’s trademark whose multidisciplinary artworks explore his creative genius in the exact form and content.

“When you see the soccer ball sculpture you do not confuse it for anything else and when you see President Mugabe’s bronze piece you know it is the Zimbabwean president,” said Sekurutau.

“As artistes we try our best to show our creativity to the world. It is also our duty to honour our leaders and that is why I did the two pieces.”

Such is his great artistry of Sekurutau, which has won him global appeal with some of his artworks found in private and permanent collections of world’s top galleries.

The two pieces will add on to his long list of masterpieces that have been presented to some of the world’s famous people including the likes of R Kelly Jay-Z, Former Super eagles Austin Jay Jay Okocha, Arnold Schwarzenegger, Mike Tyson, Kirsty Coventry, Manchester United Andy Cole and Dwight Yorke, Rev Jesse Jackson and many more

In 2011, Sekurutau was commissioned to sculpt a piece for former FIFA president Sepp Blatter during his visit to Zimbabwe.

He has also produced the Calabash Women sculptures that adorned Johannesburg’s Sandton Square during the FIFA World Cup in South Africa in 2010.

Sekurutau comes from a family tree of great sculptors with his father Richard Mteki and late uncle Boira Mteki being renowned sculptors of the first generation.

Apart from music and sculpture Sekurutau is a businessman and founder of BrynBrands Empire with interests in retail supermarkets, bottle stores, night clubs, butcheries and fast foods as well as transport, mining and a clothing line among others.