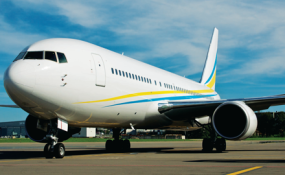 Photo: The Independent
The luxury presidential jet that was hired for US$1 million to take President Robert Mugabe to Singapore and Ghana.

“Naturally it was bound to be expensive.”

That’s the explanation President Robert Mugabe’s transport minister has given for the chartering of a plane from Bahrain to take the 93-year-old to Singapore, according to a report from the Zimbabwe Independent weekly.

The paper says Mugabe’s AirZim One plane was out of order so an alternative had to be found to transport the longtime Zimbabwe leader to see his doctors on what officials insist was just a routine medical check-up on March 1. The charter may have cost up to $1 million, the report says.

That figure has not been independently confirmed. But it will undoubtedly stoke anger in a country mired in a worsening cash shortage.

Transport Minister Joram Gumbo told the newspaper: “We were forced to hire from Bahrain because the one which is normally used by the president is still being serviced. As we are speaking the parts have just arrived and it will be up and running, but the president had to travel.”

“Gumbo said the cost of hiring the Bahraini plane was not markedly different except that the aircraft came from a bit far, so naturally it was bound to be expensive,” added the Zimbabwe Independent.

President Robert Mugabe’s son-in-law was in October made COO of debt-stricken national carrier Air Zimbabwe. Simba Chikore, who married Mugabe’s only daughter Bona in 2014, is a pilot by profession.

News of his appointment raised accusations of nepotism since he had no managerial experience at Air Zimbabwe.

“We do it every time. I don’t know why it’s news,” Gumbo told the paper, while acknowledging that the authorities also often hired a plane from South Africa for the president “whenever there is a need.”

Source :
allafrica
Share
Previous Social contract, devaluation to stem imports’
Next Zimbabwe: Mom ‘Clings to Tree for Six Hours With Baby On Her Back’ to Survive Floods