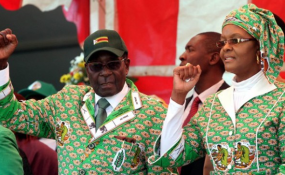 First lady Grace Mugabe’s claim that her husband can run even as a corpse in next year’s elections has left Zimbabwe’s opposition parties seething with anger and even questioning her sanity.

President Robert Mugabe turns 93 on Tuesday and wants to run for another five-year term next year despite growing pressure from within Zanu PF for him to step down.

His critics point to his advanced age and inability to rescue the economy, but Grace who last week resumed her controversial rallies in Buhera, claimed Zimbabweans loved Mugabe so much that they would not vote for any other candidate but her husband’s ghost.

Her statement appeared to be directed at Vice-President Emmerson Mnangagwa, who is accused of plotting to topple Mugabe. Opposition parties said the first lady’s bizarre rants had now become a cause for concern.

MDC-T spokesperson Obert Gutu said Grace needed “help” as her public statements cast her as someone who was “troubled”.

“It’s shocking and ridiculous at the same time,” he said. “Grace Mugabe must have taken leave of her senses. She may actually be in need of very urgent psychiatric help.”

Gutu said the first lady could have been driven to make some of the statements out of fear as she realised that Mugabe’s reign was coming to an end.

“She is aware that the fighting groups in Zanu PF loathe her, they hate her,” he said.

“They also look down upon her because of her lack of intellectual prowess and tact [and] now she is trying to cow the people of Zimbabwe into submission, but it’s in vain because no one takes her seriously.”

“Political change is certainly coming in 2018. Grace senses it and those dreaming of a Mugabe era after 2018 should wake up and smell the coffee,” he said. “Her screams are kindergarten talk by a misguided political upstart.”

“A revolutionary party that cannot think beyond its leader is fast losing its status as such,” he said. “They are used to using dead voters, now they prefer dead candidates.

“We have since said elections in Zimbabwe are a sham. We need as a nation to concentrate on retiring Mugabe.”

“For Mrs Mugabe to sit down and think that Mugabe’s corpse can lead Zimbabwe is madness, it’s confusion, it’s unbelievable to think that she can think in that manner,” he said.

“It shows how much disrespect [she has] for the people of Zimbabwe, how much disrespect they have for the values we stand for as Zimbabweans and it’s unacceptable to believe that for a nation of 14 million people, no one is able to lead this nation except a man’s corpse.”

He said Grace had exposed her lack of understanding of how democracy works.

“It shows they don’t have knowledge of how a democracy should function. It is regrettable and it is an insult to the nation,” Ngarivhume said.

Political analyst and academic Ibbo Mandaza said Grace had shown that she feared for her future in the face of the intensifying fights in Zanu PF over Mugabe’s succession.

“This signifies that the succession issue is reaching its climax and danger signs are everywhere,” he said.

“There is extreme danger and while the corpse statement is daring, it is implicit with fear and trepidation

“For those of us who have been calling for a smooth transition from the Mugabe era, it is important that the powers that be realise that we are heading for turbulence in order to make the necessary adjustments that help the nation.

“This country will need stability, political social and economic reform after Mugabe, but it’s looking perilous.”

“The anger she is exhibiting betrays her fears. She has ruffled one political feather too many,” he said.

“She is afraid of her shadow. She has been basking in the sun of illusion for a long time and takes the patience and resilience of Zimbabweans for granted,” Saungweme said.

“People like Grace should never be allowed on a political high table or near a mic. She has had a lost cause and she takes Zimbabweans for granted.

“Once her husband is dead, she will realise that all the perceived power of the Mugabe brand would have been buried with him.

“She has to learn from the fate of vacuous and frivolous wives of fallen dictators elsewhere.”