Zimbabwe: Mugabe to Hold Birthday Party in ‘Worst City in Africa’ (But Is It Really?) 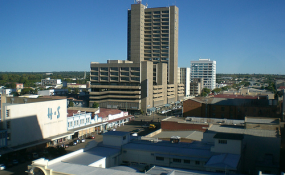 Is President Robert Mugabe really about to hold his 93rd birthday party right next to the worst city in Africa?

The first of at least 100 000 party-goers started arriving on Thursday in Bulawayo, where the big bash is to be held at a school in the adjoining Matopos district on Saturday, according to the official Chronicle newspaper.

Extra tents have been set up in case it rains and up to 200 buses are being “mobilised” to transport revellers, who will be hoping for a taste of birthday cake and the 150 cattle donated for the occasion.

Zanu-PF secretary for youth affairs Kudzai Chipanga told the Chronicle on Thursday: “We have already secured accommodation and food for everyone, including those who will arrive early.”

A controversial decision to close schools in Bulawayo and surrounding areas on Thursday and Friday ahead of the party was revoked on the back of widespread anger, according to Raymond Majongwe of the Progressive Teachers Union of Zimbabwe.

The hundreds of thousands of dollars spent on the festivities provokes outrage each year, given Zimbabwe’s fragile economic situation. The state ZBC broadcaster reported on Wednesday that $14m was needed to repair recent damage caused by tropical storm Dineo-linked floods in Masvingo province alone – and the damage has been considerable in other southern areas.

But some Zimbabweans have found another focus for their outrage: a suggestion that their “City of Kings” Bulawayo is actually the worst city in Africa in terms of housing, infrastructure, governance and the environment. The BBC reports that the finding is contained in a survey by Swiss researchers from the Ecole Polytechnique Federale de Lausanne.

The official @CityofBulawayo account hasn’t responded yet to the slight. But others have leapt to the city’s defence.

“Byo is the best run and cleanest in the country,” said @sitshaesihe.

Former education minister @DavidColtart said: “This is pathetic – have these people ever even visited Bulawayo? I call Bulawayo the world’s best kept secret!”

Have you ever visited Bulawayo? What do you think of this survey?