Deprecated: /var/www/wp-content/plugins/amp/includes/widgets/class-amp-widget-categories.php is deprecated since version 2.0.0 with no alternative available. in /var/www/wp-includes/functions.php on line 5516

Deprecated: /var/www/wp-content/plugins/amp/includes/widgets/class-amp-widget-archives.php is deprecated since version 2.0.0 with no alternative available. in /var/www/wp-includes/functions.php on line 5516 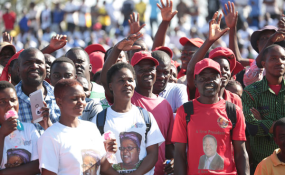 Mrs Madzivire, who was smarting from the drubbing she received in the Ward 12 Masvingo Rural District Council by-election on Saturday immediately notified Dr Mujuru of her resignation.

She said she was resigning because of Dr Mujuru’s dictatorial tendencies including the so-called expulsion of the party’s founding elders, Messrs Didymus Mutasa, Rugare Gumbo and five other officials.

“It is with a heavy heart that I am writing to you notifying and categorically stating to you that I have since ceased to be a member of your political entity from the day you unilaterally expelled the founding elders of the party without following due process as provided by our draft constitution (first draft),” said Mrs Madzivire in a letter seen by The Herald.

“I was very heart-stabbed to receive such news at a time, when I was a candidate under the banner of ZimPF as council candidate for ward 12 Masvingo West by-elections that you had taken the stance to divide the party at such a crucial moment.”

Mrs Madzivire said there were people within the party who sabotaged ZimPF in the Bikita West by-election that saw Zanu-PF candidate, Cde Beauty Chabaya garner more than 13 000 votes against ZimPF’s Mr Kudakwashe Gopo who only managed less than 2 500 votes.

“The same people who claim to be bona fide members were the same members who were campaigning for an independent candidate in Bikita West.

“They are globetrotters and move from party to party to fatten their pockets. Of major concern is that, those are the same people who are occupying crucial positions in your party (entity) from the province to national (level) and they are the same people fighting the same party resolutions because of factionalism, political expediency, selfish interests and egoism.

“I was shocked to hear the said self-anointed provincial spokesperson of your entity (Mr Jeffreyson) Chitando writing to me to withdraw from participating the registered Ward 12 battle as a resolution you passed when you came to Masvingo Province,” said Mrs Madzivire.

She said, she would have expected Dr Mujuru to tell her in person the decision to withdraw from contesting by-elections.

Mrs Madzivire said ZimPF had made a resolution that it would contest all by-elections, as such the decision to discourage her from contesting was out of order.

“Support base of ZimPF is not yet known because it’s a party still in its infancy, formed two years ago and the cabal joined the boycott of elections under the guise of fear to expose the exaggerated and weak support base,” said Mrs Madzivire.

Mrs Madzivire confirmed to The Herald that she wrote the letter.

“It is true that I resigned and the reasons are those cited in the letter,” she said.

Efforts to get a comment from ZimPF spokesperson Mr Jealousy Mawarire were fruitless.