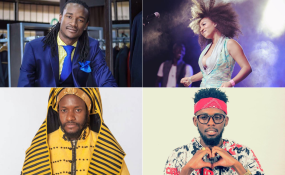 A lot is expected tomorrow at 7Arts Theatre in Avondale where top artistes will battle for accolades at the National Arts Merit Awards ceremony.

Artistes will square up in various categories, but the main focus will as usual be the music category that has names like Jah Prayzah, Winky D, Killer T, Ammara Brown and Fungisai Zvakavapano-Mashavave as nominees for different awards under the section.

In the television category veteran actress Jesesi Mungoshi, Admire Kuzhangaira and Antony Tongani are some of the artistes vying for accolades.

The National Arts Council of Zimbabwe on Tuesday announced performers of the night.

Jah Prayzah, Probeats, Chipawo and Airforce Percussion group among others will take to the stage to entertain guests.

This years’ edition is running under the theme “Partner with the Arts” and the major investor is Old Mutual, supported by various corporates and individuals.

“These have partnered Nama in fulfilment of the theme, thereby contributing to the continued sustainability of the awards. Such support is commendable as it contributes to the promotion and development of the creative industries.”

Various artistes, arts products and institutions who were nominated will walk away with accolades on the awards night. From 95 nominees, 35 winners will walk away with the coveted gold-plated Nama trophy. This year, nominees are from Harare, Bulawayo, Manicaland, Matabeleland South, and Masvingo.