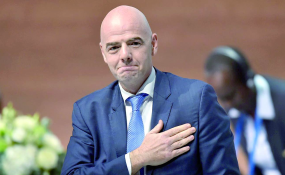 President Mugabe has hailed the commitment made by visiting FIFA president Gianni Infantino to support football development projects in Zimbabwe. Infantino, who was in the country at the invitation of ZIFA president Philip Chiyangwa for his birthday and COSAFA election victory celebrations, paid a courtesy call at State House yesterday where he also had an hour-long briefing with President Mugabe on the state of football development in Zimbabwe.

The Swiss lawyer was accompanied by FIFA secretary-general Fatma Samba Diouf Samoura and a small delegation from the world football governing body.

Speaking after the meeting, Minister of Sport and Recreation Makhosini Hlongwane said President Mugabe was impressed by Infantino’s visit and the guarantees he made towards the Government-sponsored Community Sport and Recreation Club system and the envisaged establishment of a national football academy.

The ambitious community club system, which seeks to see the establishment of 8 000 clubs across the country, has already been set in motion, but funding and human resource shortages have hampered progress.

Hlongwane said the meeting between the President and the visiting FIFA boss was positive and Government and ZIFA are now looking into the future with optimism after getting FIFA’s backing.

“He (President Mugabe) was very impressed. The President is very happy that FIFA is prepared to fund the Community Sport and Recreation Club system as far as football is concerned.

“With regards to the Community Club system, we have missed the deadlines twice. Maybe we underestimated the enormity of the task.

“This is a project that started in September last year immediately after the national Sports Policy was passed and we missed the first deadline which was sometime end of November into December 2016. There is another deadline coming at the end of this month, I believe.

“The major challenge has been human resources at the grassroots level. For some of this work, we have had to collaborate with the Ministry of Youth and the Ministry of Women Affairs to make sure that we have structured sport at the community level.

“For us as Government it is important to make sure that organised sport is availed to the people who want to take up sport as a lifelong career and pursue that right up to the stage where they are able to find access into elite sport leading to podium performances.

“The coming of Mr Infantino to Zimbabwe and Africa is very important because it gives us an opportunity to interact face-to-face with him on issues affecting the development of football on the continent.

“One key challenge is that Governments are accused of interfering in football administration. He did provide very important clarifications in respect of that matter, but we did make a proposal that let’s put together a forum of Southern African Ministers with FIFA and football association presidents coming together to discuss issues of mutual interests that situate in the development of football,” said Hlongwane.

Infantino, who left for Uganda immediately after the courtesy call, wished President Mugabe a belated happy birthday, exchanged souvenirs and had photo shoots.

Before meeting the President, Infantino also had a closed door session with Hlongwane and ZIFA officials where they also came out speaking with one voice on the direction Zimbabwean football needed to take.

In particular, the FIFA boss was greatly encouraged by the interest shown by President Mugabe and his Government towards football development.

“We have been discussing football in general, about football in Zimbabwe, about what we can do together with the football association and the Government to develop football in this country,” said Infantino.

“There are some incomplete projects which have started and which we are fully supporting. We would like to thank the Government for having raised these projects, like the one to create and set up 8 000 football clubs around the whole country to develop and foster grassroots football all this in a structured way.

“We have also been discussing the project of national football academy with ZIFA. So we are co-operating. FIFA is helping and investing together with our partners at ZIFA in co-operation with Government to make sure that these projects will revolutionise football in this country and bring the legacy to everyone,” said Infantino.

“Of course, one of the FIFA principles is non-interference of Governments in football affairs, but this is for the sporting side and for the development of the game we are co-operating as partners. At the end of the day it’s a win-win situation.”

The former UEFA secretary-general, who has been in office for only a year, has done a lot to benefit Africa.

Apart from increasing the participants at the World Cup from 32 to 46 countries by the time the 2026 edition kicks off, FIFA have also multiplied the supporting grants to associations almost four-fold from $250 000 per year to US$1,2 million.

This means each association has access to $750 000 per year for football projects such as pitches, competitions and women’s football.

Every association also receives up to $500 000 per year for running costs in areas including administration and governance.

Additional funds could be increased as per request, but Infantino stressed that continued financial backing will only be subject to compliance to the tenets of good governance and transparent use of the funds.

Infantino also said a country like Zimbabwe can now afford to have a “realistic” dream of playing at the World Cup as plans are afoot to double the slots of qualifying teams from the continent from five to 10.