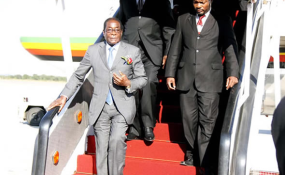 President Robert Mugabe’s spokesperson has stressed that the 93-year-old president’s departure for Singapore on Wednesday is for a “scheduled” medical check-up.

“His Excellency the president left this morning [Wednesday] for Singapore for a scheduled medical review. We expect him back in the country early next week,” George Charamba said in a statement quoted by state media.

The word “scheduled” is key: the authorities clearly do not want rumours circulating that the president’s health has suddenly worsened. Mugabe celebrated his 93rd birthday last week, and spoke at length at his birthday party on Saturday in the Matopos district near Bulawayo. His speech then, though slow, was stronger than it had been in a long interview he earlier gave to the state broadcaster to mark his birthday.

To be fair, Mugabe was in Singapore at very nearly the exact same time last year, almost certainly for medical reasons. Reports from March 2016 say Mugabe returned from Singapore before the middle of the month. That trip was made more secretly.

Tweeted watchdog @ZimMedia Review: “Days after asking us ‘What is it that you get (abroad) which you can’t get in Zimbabwe’, Mugabe has today left for Singapore for a ‘medical review’.”

The only presidential medical complaint that the authorities have ever openly discussed is cataracts. But former central bank governor Gideon Gono disclosed that Mugabe was at one point being treated for prostate cancer, according to Wikileaks in 2011.

Meantime, midwives at public hospitals in Zimbabwe announced on Wednesday they were joining doctors and nurses in a strike over pay and conditions, according to a statement being circulated on social media.