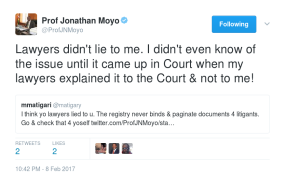 Zvamaida Murwira — Legislators were stunned yesterday after Higher and Tertiary Education, Science and Technology Development Minister Professor Jonathan Moyo accused the Zimbabwe Anti-Corruption Commission of being behind a break-in at his offices in August last year. Prof Moyo accused Zacc of leaking the information to the media several documents he said the anti-graft body “unlawfully got” from his offices at the New Government Complex.

In his evidence, Prof Moyo said it was surprising that the documents that The Sunday Mail reported as having “stumbled” upon by Zacc, were the very documents that went missing when the ministry’s offices were broken into.

He said his office, his permanent secretary, Dr Machivenyika Mapuranga and seven directors had their offices broken into and ransacked. “Then we hear people boasting that they have stumbled on documents. You do not take documents by breaking into offices, that is unlawful. You use warrants,” he said.

He said the majority of the $4,5 million worth of transactions deemed to be suspicious by the media had been approved by his predecessors.

Prof Moyo also attacked Zacc’s decision to write to Speaker of the National Assembly Advocate Jacob Mudenda justifying corruption allegations the anti-graft body had levelled against him in respect of the Zimbabwe Manpower Development Fund.

He said what was strange was that Zacc copied the letter to Vice President Emmerson Mnangagwa, Home Affairs Minister Ignatious Chombo and Chief Secretary in the Office of the President and Cabinet Dr Misheck Sibanda.

Adv Mudenda was head of a Zanu-PF panel constituted to probe claims by Prof Moyo that the money he took from Zimdef funded party activities. Prof Moyo said as a result of Zacc’s conduct, which he said did not take the sub-judice rule, officers in his ministry were now living in fear and sometimes failed to cooperate with him on some issues.

“I want you to take note of the fact that it has been very difficult for us in the ministry to discharge our policy and legislative responsibility because of this.

“I want you to take note that it is my considered view that we have been derailed not necessarily of the law, but because of issues which have nothing to do with the law,” Prof Moyo told the committee.

“On the 9th of December 2016, Zacc wrote a letter to the Speaker raising all sorts of issues and if the rule of sub judice applies, it is surprising that the matter is at the courts but Zacc is writing to the Speaker, in the signature of the chairperson, but clearly raising issues that are of interest to a particular commissioner,” said Prof Moyo.

“That cannot be hidden from the public. The idea that people do things behind the scenes and do so in violation of the legal proceedings is unacceptable. “We think that if the Zimdef issue is going to come to Parliament, it has to do so through this committee. We think it is unprocedural and even illegal to do it in this manner,” he said.

Prof Moyo said it was now unworkable to discharge his duties in the ministry and even if the President was to assign another person in future to steer his ministry, he would not deliver as long as that person was targeted.

“But even if that somebody else is not targeted they are going to find a bureaucracy that is now in a state of crippling fear,” he said. Prof Moyo urged the committee to take interest in Zacc so that it could be held to account to Parliament.

Legislators did not however grill Prof Moyo on justification of buying bicycles for traditional leaders in his Tsholotsho North constituency. Instead, some of them requested to be given laptops and that the ministry should facilitate workshops for them to have an appreciation on the ministry’s Sustainable Development Goals.

They also requested to have the ministry facilitate field visits of projects funded by Zimdef.

Source :
allafrica
Share
Previous Zimbabwe: ZSE Boss Acquitted
Next Zimbabwe: Activists Want to Derail Mugabe’s 93rd Party – but Will They Get the Support They Need?