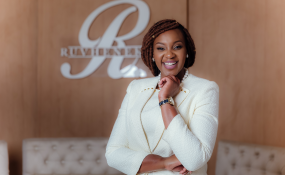 Popular television and radio personality and member of the Graça Machel Trust Women in Media Network, Ruvheneko Parirenyatwa, is breaking new ground by launching an online TV show going by her first name.

“On Thursday 2 February 2017, I launch my online TV Show called, “Ruvheneko.” It will air online, using new media platforms, so get to liking the Facebook page, “Ruvheneko” so you don’t miss a moment! There will also be the use of Twitter and Instagram so follow me there too. The purpose of using these mediums is so that (a) We are LIVE, (b) We are interactive with our audience as it happens so we get their input on every topic we discuss. Aware too that there are millions who are not on any form of social media, the show will be uploaded on my YouTube Channel, “Ruvheneko Parirenyatwa” for later viewing.”

Ruvhi, as she is popularly known, also made a promise to her followers.

“My audience should look forward to the return of The Iron Lady! They didn’t call me that for nothing and I will continue to investigate and interrogate issues that deserve that kind of approach. At the same time, I am young so there will be lighter days where we will just ‘chat’ with some guests and allow for voices to be heard and stories to be told. It’s “Ruvheneko” so by definition, I should live up to that.”

She said it has always been her dream to go this direction although things were somewhat expedited by her sudden departure from ZiFM late last year.

“It’s always been my dream to host my own TV Show; something I can call my own; but circumstances certainly pushed me to think fast and improvise.”

The online TV show guests will largely be determined by public interest.

On the issue of costs involved and whether this was a solo project, Ruvhi said:

“Of course! Quality can’t come cheap and certainly can’t come free. It is a solo concept, but not a solo project. Once something grows, it attracts and reaches out to partners and team players. I have had overwhelming support since I started whispering about this and since I did the interview with Stunner which had over 300K views (and counting).

“People who understand business have come forward wanting to work with me and I thank God every day for this because I was not expecting it! Combine the power of new media, my network and the correct topics with the marketing departments of companies that know how to innovate – we are definitely onto something.”

Zimbabweans have been used to the traditional television channels but it is now increasingly looking like online television is the future.

“Well, no one knows the future of Zimbabwe, except our God. Traditional media exists and it’s not going anywhere for a while – which is great – but what new media is doing is it’s adding variety to what Zimbabwean content creators, like myself, have to offer to Zimbabwe and ultimately the rest of the world.

“I’m in a couple of groups online where we as this generation are itching to launch our content – grappling to create it – and afraid to imagine it. We are bursting with talent and ideas so we are finding ways to express ourselves,” said Ruvhi.

Editorial independence has been a contentious issue in media worldwide and is Ruvheneko ready to lead the way?

“LOL! Others have already led the way; there are platforms like ZimboLive TV and Hotbox amongst others. Look at us like a complex infrastructure, intertwined and building around each other adding value to the network and ultimately our own net worth.”

The trend in Zimbabwe has been that any successful project triggers a flood of similar works with the immediate danger being some of those joining the bandwagon crossing the line to try and win audiences.

Online television is not an exception and this scenario provides challenges for people like Ruvheneko as she plunges into uncharted waters tomorrow.

“People have already followed suit. It’s humbling that people see me as a trendsetter where online conversation is concerned. What I see as a threat is more in our own borders than anywhere else.

“We can’t escape the tight rope we walk on as journalists; so what’s worrying is when others outside the Fourth Estate who don’t understand our guidelines and prudence in navigating this field try to do the same thing in ways that raise flags and consequently invite unforeseen statutory instruments and such. This space right now is ‘too free to be true’ so we have to tread carefully and create content that is entertaining, valuable, objective and true.”

This article was first published by H-Metro.