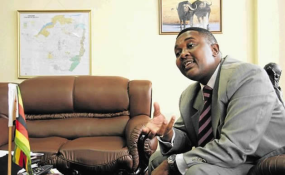 Former Seychelles Tourism head, Mr Alain St Ange has come under fire for violating diplomatic etiquette in his desperate bid to counter Dr Walter Mzembi as Africa and Sadc’s sole candidate for the United Nations World Tourism Organisation secretary-general set for May. Dr Mzembi, who is Zimbabwe’s Tourism and Hospitality Minister is currently drumming up support from other countries and regions after he was endorsed by both Sadc and the AU.

Despite that standing resolution by Sadc and the AU, Mr St Ange lately threw his name in the hat for the secretary-general’s post. He is using all sorts of dirty tricks to garner support, especially from the Western world, including attacking Dr Mzembi and President Mugabe.

Mr St Ange’s remarks in an interview recently with the Voice of America, which beams into Zimbabwe illegally painted a picture that President Mugabe, during his tenure as the African Union chairperson, arm-twisted the continental body to support his countryman.

In the interview Mr St Ange said, “When President Mugabe was head of the African Union, he found a way that Walter Mzembi became the candidate. It is his right to be candidate, but you can’t buy all the people’s rights to be candidates in a democratic state today, to put forward your candidature.”

Foreign Affairs Minister Simbarashe Mumbengegwi yesterday said: “Until I see the report you are referring to, I cannot make any comment. What I can only say is that Cde Mzembi was properly endorsed not only by Sadc, but was also endorsed by the African Union in the normal way.

“The endorsement started at the officials level, then at ministerial level and Heads of State level. Cde Mzembi went through all the normal processes and procedures just like any other candidate. All procedures were strictly followed, so Cde Mzembi is the sole candidate for Sadc and the African Union.”

Mr Godwine Mureriwa who is a political and diplomatic commentator, said the remarks by Mr St Ange were unfortunate as the region should not be seen competing negatively.

He said: “It is childish for him to say such remarks and to try and throw spanners in Dr Mzembi’s way at a time when his chances of winning the post look brighter. The region and the continent should be seen pulling in the same direction.”

Mr Mureriwa said Zimbabwe was strategically positioned in the region and was also home to one of the seven wonders of the world, the Victoria Falls. Dr Mzembi’s victory would not only benefit Zimbabwe, but the region and the entire continent.

South African-based analyst Mr Tinashe Tiki said: “It is clear that Mr St Ange is a sponsored candidate. Africa and Sadc, to which Seychelles is a signatory, made a resolution a long time ago, and you wonder where he was all this time. I think it is important for Africa to remain focused and not be distracted by this sideshow by Mr St Ange and his hidden handlers.”