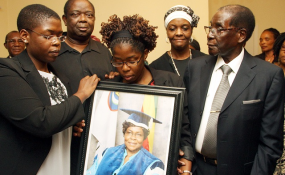 Zimbabwe Open University vice chancellor Professor Primerose Kurasha has been accorded a State assisted funeral, Information, Media and Broadcasting Services Minister Dr Christopher Mushohwe, said yesterday. Dr Mushohwe said this in an interview yesterday after paying his respects to the Kurasha family. “The President has declared that Professor Kurasha’s funeral is going to be a State assisted funeral. We are going to assist the family and Government will give $15 000 towards meeting the expenses. In addition to that, we will also assist logistically so that the funeral becomes befitting to our education hero,” Dr Mushohwe said.

He said Prof Kurasha had overcome resistance from various quarters when she came up with the idea to set up an institution of higher learning through distance learning.

“When she came up with the idea of distance learning, there were many people who contested her idea. His Excellency the President had to intervene and told those who doubted her to give her an opportunity.

“Her endeavours transformed the education system in our country and afforded many people who did not have degrees an opportunity to get university education,” he said.

He said the loss of Prof Kurasha was a blow to the nation.

“Her untimely and tragic departure is a blow and brings sadness not only to her family but the entire nation. She is someone Zimbabwe will miss, someone students who went through ZOU will miss and some of us who were close to her will carry the scar for some time,” said Dr Mushowe.

He said Prof Kurasha was an honest person and respectful to others.

“She was a thoroughly honest woman, very religious, very respectful. She imparted to her children the seed of love, discipline and respectfulness. Her children are well mannered and well behaved,” he said.

In his condolence message on behalf of the civil service on the death of Prof Kurasha, Dr Sibanda described her as a “vivacious and supremely talented leader”.

“Her strong sense of mission always pushed her to new and unfamiliar frontiers of achievement, which climaxed in her becoming Zimbabwe’s first woman university vice chancellor, at the helm of ZOU and chairperson of the Distance Education Association of Southern Africa, among other eminent national and international appointments,” said Dr Sibanda.

He said under her stewardship, ZOU grew and continues to give education to many disadvantaged citizens, who would otherwise have no access to tertiary education in other universities.

Dr Sibanda said despite her academic and intellectual disposition, Prof Kurasha exhibited a high level of versatility through her role as a mother, wife to Prof James Kurasha and a philanthropist par excellence, who assisted others at their time of need.

He said despite all these achievements, Prof Kurasha remained level-headed and a down-to earth person amenable to constructive criticism.

Dr Sibanda said the untimely death of Prof Kurasha was a loss not only to the Kurasha family, but to the whole nation.

“To Baba Kurasha and your family, may you take comfort in that the loss of Amai Kurasha is not just yours alone, but one for the international academic community, Africa, the sadc region and indeed our entire nation,” said Dr Sibanda.

Prof Kurasha died on Friday at a private hospital in Harare after a short illness.

Burial arrangements will be announced in due course.

We Are On the Brink of Greatness – President

Zimbabwe is ranked among the top five African reformers, hitting the top spot as the …