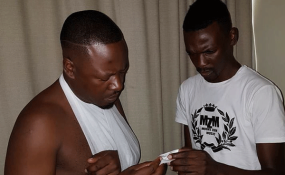 Photo: The standard
Stunner (left) was allegedly assaulted at a Harare club.

Local rapper Desmond “Stunner” Chideme is nursing wounds after unidentified people assaulted him outside a popular Harare night club on Friday night, it has emerged.

Yesterday a picture of a wounded Stunner surfaced on social media fuelling speculation that he had been beaten by people sent by his ex-wife Olinda Chapel with whom he is at loggerheads.

Stunner, however, professed ignorance of his attackers’ identity.

“I do not know who they were,” was all he told The Standard Style yesterday.

The incident took place a few hours after Olinda threatened to use unspecified action against Stunner in a Facebook live stream video.

“Desmond Chideme you will ask for forgiveness today. I am going to show you the power of money,” she fumed.

In addition, Chapel also appeared to be instructing a man on the phone to go and do whatever he could to Stunner, as well as collect all property belonging to her from their Greendale residency.

“Do not kill him, but do whatever you want because he is evil],” she instructed the man on the other side of the line whom she addressed as her brother.

Although it could not be established if those are the assailants that attacked Stunner, the caller on the other hand appeared to be insinuating the use of “State agents” to deal with Stunner.

Meanwhile, the UK-based mother of two has sensationally alleged that Stunner impregnated his teenage girlfriend Dyonne Tafirenyika and influenced her to abort.

She made the revelations in her series of fresh videos on Friday.

“Desmond, you are evil, getting another girl pregnant while you are married, then you make her abort,” she claimed.

“Making someone abort, is it even legal to have an abortion in Zimbabwe?” Chapel questioned.