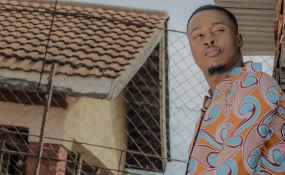 The song is not the usual sound of Njabulo Nkomo and on this song he targets love-birds.

Backed by brilliant choreography, the video is star-studded with Stunner and ExQ as part of the cast.

The story line is of a man who cheats on his bride-to-be to and Tytan plays a saviour who rescues the heartbroken lady.

Speculations that the video exposes Stunner’s cheating, which has seen him falling out with wife Olinda, have been going around since the video went online.

However, the musician said the video is not about Stunner and his private life, but the choreography is the selling point.

The video was shot at Meikles Hotel in January and was produced by Walter Chaota aka Mr Elders who is also the man behind “Mukoko” video and Takura’s “Maobama”.

Tytan said the response from people yesterday was amazing and he feels it is going to make waves for a while.

“It is fantastic how people like this song. It is ideal for the day and all the ladies love it,” he said.

With his album on decks, Tytan is still working on singles then later compile them.

He said, “Right now all I need is to push my singles and release a few more good singles then introduce my album when I am sure it is going to go well.”