Activists are transported in a police truck after they were detained ahead of a protest against government plans to introduce a new currency, in Harare, Zimbabwe November 18, 2016. REUTERS/Philimon Bulawayo 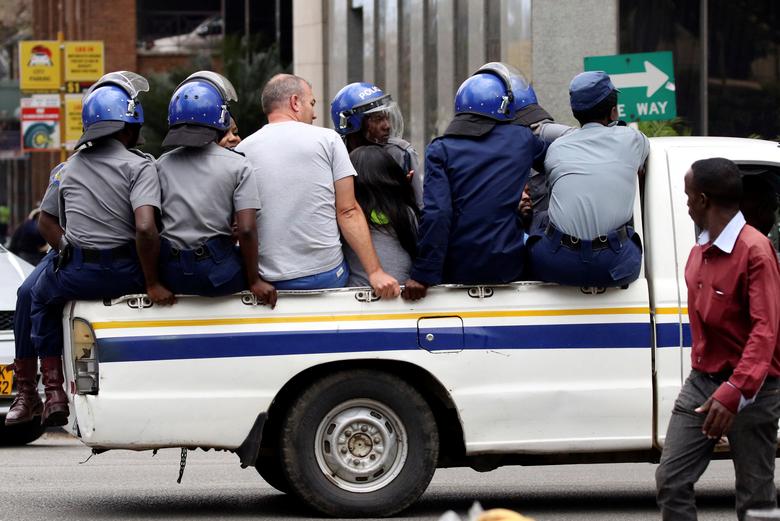 Activists are transported in a police truck after they were detained ahead of a protest against government plans to introduce a new currency, in Harare, Zimbabwe November 18, 2016. REUTERS/Philimon Bulawayo
By Ed Cropley | HARARE

Six Zimbabwean anti-government activists were shot at and beaten on Friday by a gang of men, some wearing police riot gear, ahead of a protest against government plans to introduce a new currency, two of the victims said.

Tensions are rising over the pending introduction of so-called “bond notes”, a quasi-currency that is meant to alleviate chronic cash shortages but which many locals fear is a back-door attempt to bring back the inflation-ravaged Zimbabwe dollar.

Two of the people who said they were assaulted by men in police garb shortly after midnight in a township on the outskirts of the capital Harare said that three fellow activists were missing in the wake of the incident.

One of the victims, Patson Dzamara, is the brother of pro-democracy activist Itai Dzamara, who disappeared more than a year ago and is believed by human rights groups and diplomats to have been killed.

“They pulled us out of the car, made us lie down and started beating us,” 41-year-old Shonhai Rukore told Reuters, pulling up his shirt and trousers to reveal long bruises across his back and grazes on his lower legs.

“Then they took Dzamara and blindfolded him. That’s when I managed to get up and run away.”

Dzamara is in hospital with similar injuries, according to photographs and comments posted on social media by groups opposed to 92-year-old President Robert Mugabe’s 36-year-rule.

The Zimbabwe dollar was scrapped in early 2009 after being rendered worthless by multi-billion percent hyperinflation. Fearing a repeat, many Zimbabweans have been emptying their bank accounts of dollars, putting the entire banking system at risk.

Ishmail Kauzani, who was driving one of the two cars containing the activists when they were blocked by unmarked pick-up trucks, said he managed to escape into the night under a hail of gunfire.

“They were firing on us when we were still driving – many, many shots. It was like a war zone, a barrage of bullets.”

Both men said two of the dozen or so assailants were wearing police riot gear. The activists’ vehicles were torched after the incident, Kauzani said, showing photographs.

The anti-bond note protest drew only a handful of people, of whom eight were arrested, according to human rights lawyers.

The central bank has acknowledged fears over the bond notes, but says it will only be injecting $200 million into the economy – a sum it says will not be inflationary – and has promised not to print any more notes than that. Few Zimbabweans believe it.