Mavis Chirandu is a 21-year old soccer player representing Zimbabwe in the Rio Olympic Games. The views expressed are her own.

(CNN)From the very beginning of my life, the odds were stacked against me. As a child, I was abandoned on the side of the road by my biological mother. If not for the grace of a Good Samaritan and the SOS Children’s Village in Bindura that he brought me to, I would not be where I am today.

Twenty years after being left on the side of the road, I am representing my country, Zimbabwe, in the Rio Summer Olympics.
And I’ve even scored a goal.
To me, football (soccer) is not just a sport. It’s much more than that — something I came to realize very early in my life.
I remember when I was 11, and how I always wished for a delay in the sun starting to set, because that signaled the end of practice for the day. At 13, I began dreaming of playing for the likes of Liverpool Ladies FC or Arsenal LFC. At 15, I had my eyes set on the Zimbabwe national team. And at 19, I fulfilled that dream and captained our under-20 team.
In my eyes, growing up in the village was just as meaningful as growing up in a traditional home. I had brothers and sisters and a loving caregiver, who I consider to be my mom, who treated each and every one of us as if we were her own. We all chipped in around the house, played games outside, and came together around the dinner table each night. 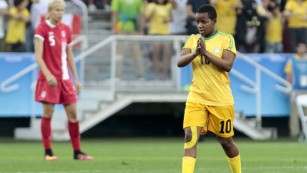 Mavis Chirandu of Zimbabwe celebrates her goal against Canada on Saturday in the Olympics.
The will and determination that you see on the pitch is a direct connection to all of the support that I received from my SOS family growing up. I was always assured that my dreams were attainable, and that my talent was special. This encouragement and support gave me the confidence and hunger to chase my dreams.
I acknowledge the significance of representing my country on this global stage; and the fact that I’m representing much more than just that. Although I have since left the village, I often think about the millions of children like me, who were abandoned as a child; I am also representing them this summer.
For those children disheartened at the fact that they don’t have a “traditional” family, I want to reassure them that with hard work and determination they can achieve whatever they want.
I am told in Brazil that around 1.5 million children face a life in a home that does not have solid walls, and in 2014, about 21 percent of Brazil’s 207 million citizenslived below the poverty line. During the two weeks of the Olympics the world watches in awe as the best athletes in the world compete for the highest honor in sports while completely overlooking the reality that many children are facing just next door, in the favelas that surround the stadiums.
Often times, economic struggles place such a burden on a family that children have to work just to help feed their relatives. This should not be the life that any child should have to live.
Without the help of my SOS mom and family in the village, I undoubtedly would have suffered the same fate as so many orphaned children today. So my hope this summer is to shine a light on the importance of a solid family structure in a child’s life.
Those in the village recognize this, and strive to support vulnerable families who are at risk of breaking apart and children who are no longer able to live with their parents. The difference this made in my own life is indescribable.
So, as I laced up my sneakers and stepped onto the pitch this week, I hope the world was able to watch as I fulfilled my lifelong dream of playing in the Olympics. Watch as I beat odds that were so heavily stacked against me. And watch as I tried to give hope to the millions of orphaned children around the world, showing them that their dreams are very much achievable.
Share